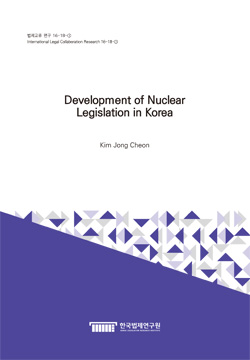 Ⅰ. Background and Purpose
□ The Atomic Energy Act was enacted in March 1958, and the Atomic Energy Institute was officially launched in January 1959, thereby setting up a system for the use and development of nuclear power
□ Also, in March 1959, the Atomic Energy Research Institute was founded for to carry out research and development (R&D) projects on nuclear power
□ In 1962, the institute began operating TRIGA Mark-II, the first nuclear reactor set up for research purposes in Korea, and officially initiated basic research on nuclear power and research on isotope production. The development of nuclear energy in Korea continued well into the presidency of Park Chung-hee
□ The construction of Kori Nuclear Plant No. 1, the first commercial nuclear plant in Korea, began in Jangan-eup, Gijang-gun in Busan on March 9, 1971, and was completed in 1978. During its construction, approval was acquired to build five new nuclear power plants (NPPs)
□ This opened the era of nuclear energy, and the past governments (former presidents Chun Doo-hwan, Roh Tae-woo, Kim Young-sam, Kim Dae-jung, Roh Moo-hyun, and Lee Myung- back and current President Park Geun-hye) have continually built new nuclear power plants in the country
□ However, IAEA, an international organization specializing in atomic energy, has stressed the importance of ensuring independence of the regulations on the safety of using nuclear power. Also, following the Fukushima Daiichi nuclear disaster in March 2011, the government of the Republic of Korea began voicing concerns regarding the safety of nuclear power plants
□ As a result, there has been growing emphasis on the need to perform a general review of the current nuclear power plant policy and to make efforts to reinforce the safety of nuclear power plants. Accordingly, ways to effectively separate the nuclear safety regulations and promotion regulations were discussed, which resulted in the Atomic Energy Act becoming divided into the Nuclear Safety Act and the Nuclear Energy Promotion Act. In addition, the Act on the Establishment and Operation of the Nuclear Safety and Security Commission was enacted to operate the Nuclear Safety and Security Commission as an independent department. Aside from these efforts, the Nuclear Damage Compensation Act dealing with nuclear safety was amended, and the Act on Protective Action Guidelines Against Radiation in the Natural Environment and the Act on Measures for the Protection of Nuclear Facilities, etc. and Prevention of Radiation Disasters were established. Furthermore, for the purpose of managing radioactive wastes, the Radioactive Waste Management Act and the Special Act on Assistance to the Locations of Facilities for Disposal of Low and Intermediate Level Radioactive Waste were enacted
□ Thus, this study was conducted with the aim of examining the ways to lay the foundation necessary for sharing Korea’s experience in developing nuclear legislations with developing countries and transition countries

Chapter 2 Nuclear Energy Development in the Republic of Korea 25