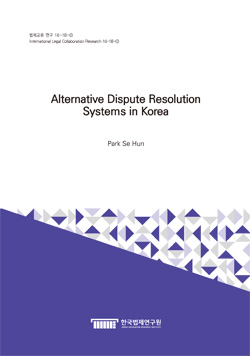 Ⅰ. Background and Purpose
□ Development of society and complexity of disputes
○ As the society develops, disputes have been continuously arising.
○ It is necessary to resolve disputes that have already arisen in a speedy and efficient manner at a low cost.
○ The resolution of disputes is essential to the development and unity of the society.
□ Complex disputes
○ Complex disputes that involve people at large, such as environmental disputes and disputes over product liability.
○ It is impracticable to resolve disputes only within the framework of the existing judicial system.
□ Rapidly advanced democracy
○ The issue of conflicts arose in the late 1980s when democracy was rapidly advanced.
○ Conflicts have arisen in various sectors, including ideology, environment, labor relations, classes, and regions.
○ Conflicts have imposed an enormous burden of social and economic coast

Ⅱ. Main Contents
□ ADR in Korea
○ Parties to a conflict can actively participate in the proceedings of resolving the conflict, compared with litigation.
○ Parties to a conflict can take part in the whole process of resolving the conflict.
○ It is quicker and cheaper than litigation and appropriate for draw various conclusions to satisfy the interest of the parties involved.
□ Typical administrative ADR under the dispute mediation system in Korea
○ The system can be classified into judicial ADR, administrative ADR, and private ADR according to the responsible organization or institution.
○ Most of administrative ADR schemes in Korea are based on a respective law.
○ In general, mediators are appointed or commissioned by the head of the competent administrative agency, mainly from among persons who have knowledge and experience in the relevant sector from legal circles, academia, the group of public officials, etc.
○ Even in administrative ADR schemes, mediation, intercession, and adjudication are included, but mediation has been used most frequently.
○ This paper aims to help people access details of the dispute resolution system in Korea in a easier way by looking into exemplary cases of ADR schemes.

Ⅲ. Expected results
□ This paper in which dispute mediation schemes in Korea are categorized in a taxonomic way can be utilized as a material that increases the understanding of the dispute resolution system in Korea.