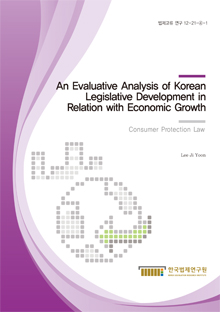 Ⅰ. Background and purpose
□ Background of research
○ In South Korea, the need for protection of consumers emerged as an important social issue in the 1970s amid the country’s achievement of a rapid economic growth. The country has made efforts to settle such issues by enacting laws, including The Consumer Protection Act (1980), in diverse sectors related to consumer transactions and safety.
○ Thirty-two years have passed since the enactment of The Consumer Protection Act, which was the first consumer law adopted in the country. During this period, South Korea achieved a rapid economic growth and became the 24th member of the Development Assistance Committee(DAC), an affiliate organization of the Organization for Economic Co-operation and Development(OECD), in 2009. The country’s consumption-related matters have gone through epochal changes along with changes in the social and economic sectors.
□ Purpose of research
○ It is necessary to make preparations to develop the country’s consumer laws in a future-oriented way that can meet the rapid changes in consumer environment and fulfill its desired objectives. This study intends to shed light on the process of the development of the country’s consumer laws, check their current status and problems, and come up with their future prospects.
○ Developing countries in Asia or transitional countries that are having a rapid economic growth also see an increasing need for the formulation of policies for consumer protection and compensation for consumer damages. It is expected that this study on South Korea’s consumer laws will be useful as a referential material for later-starting countries in connection with their need to revamp their similar laws.